A linear park, the Thea Foss Esplanade hugs the western edge of the Foss Waterway, connecting pedestrians to the Museum District, the life of downtown, the Prairie Line Trail, and a bit of Tacoma history.

Watch boat traffic in and out of the marinas. Dip into a restaurant and enjoy an al fresco lunch. Gawk at Mount Rainier in all its glory. Beat the summer heat (or escape the winter rains) inside world-class museums.Soak up Tacoma’s seafaring story at Puget Sound’s premier maritime museum. The esplanade offers a unique entry point to Tacoma’s rich culture.

Much has changed along the Thea Foss Waterway. Condos, restaurants, and museums have replaced wharves, sawmills, and warehouses. What remains the same? The waterway is still a thriving avenue of economic growth. 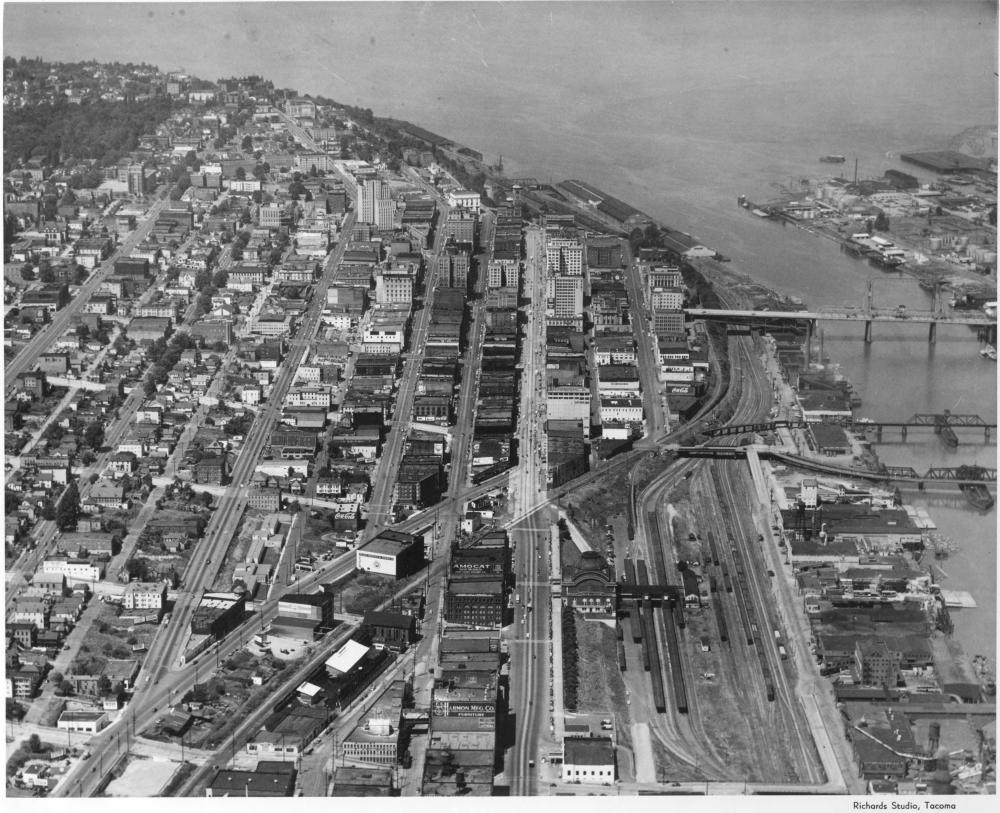 Birdseye view of the city

An aerial view of the city (1948). Prairie Line Trail in the center. Thea Foss Waterway off to the right (Tacoma Public Library, Richards Studio D-34612102).

The waterway received its name from Norwegian immigrant Thea Foss. Moving here with her husband Andrew, in the summer of 1889, Foss began the Foss Launch Company on this waterway. Her company and the waterway grew together. By 1900, the waterway boasted a mile-long complex of wheat wharves.

What about Foss? After starting with a single rowboat, Foss’ collection of water craft soon grew to 200. The Fosses rented their boats to fishermen, longshoremen, and even picnickers. As they grew their business to include powered vessels and tug boats, the couple changed their company name to Foss Launch and Tug. Their motto was “always ready.” The duo’s industriousness and business savvy paid off. The modern version of their company, Foss Maritime, is the largest tugboat company in the western United States.