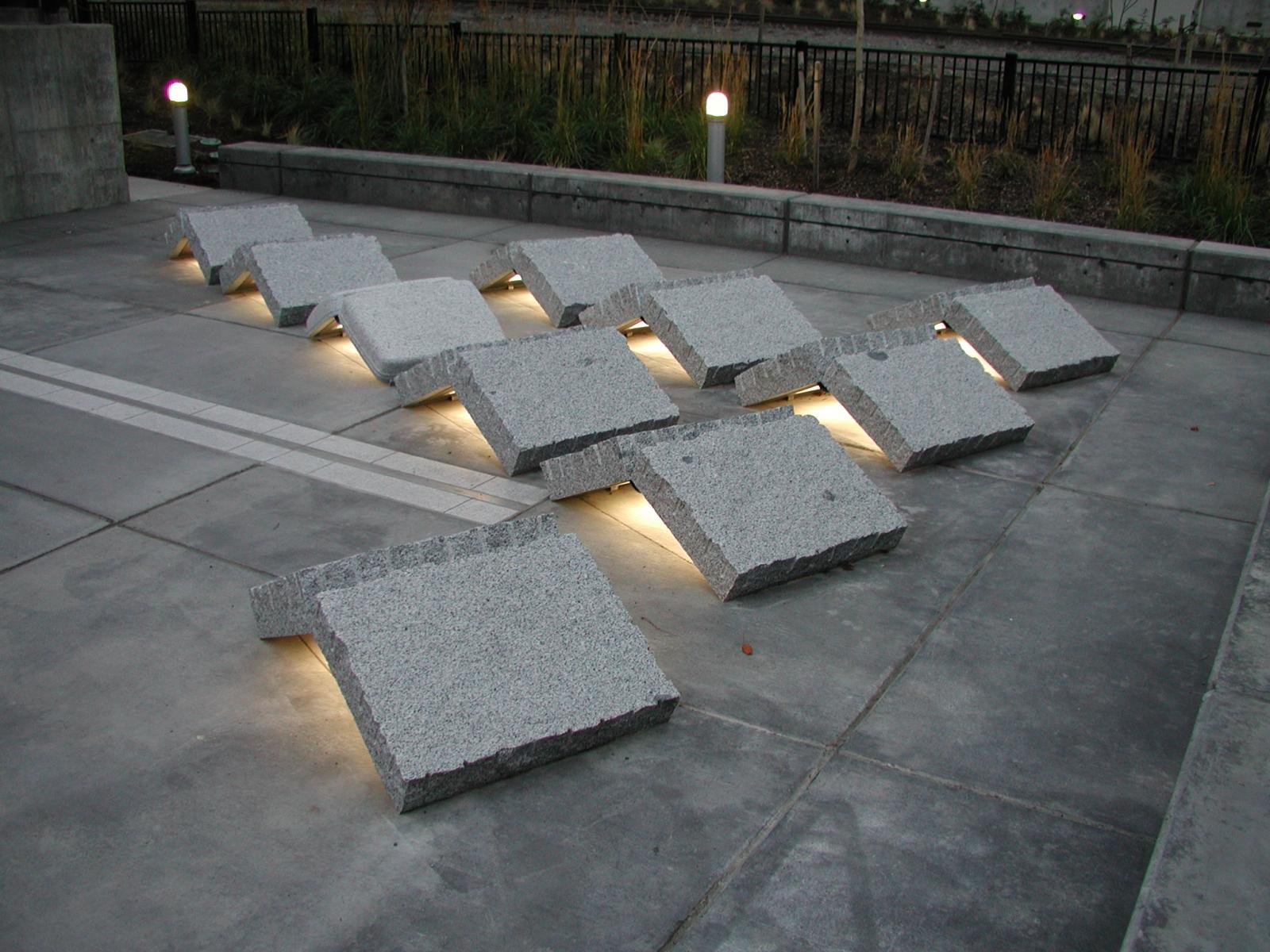 Brian Goldbloom’s stone sculpture draws inspiration from Tacoma’s place as the Western terminus of the Northern Pacific Railroad. Made up of 10 hinged pieces of rough white granite that reference travelers' suitcases, the sculpture sits in a courtyard close to the location of the original passenger terminal, Villard Station.

Nine of the sculpture's ten granite forms are left rough; one has been shaped into a smoother, more recognizable suitcase form, providing a focal point and interpretive clue to the piece. Recessed lamps in the granite flood the ground with pools of light, making the sculpture particularly striking at night.

These multiple forms help to remind us of the crowded terminal city that once surrounded this site, and the upturned suitcase hints at those who emptied their suitcases and put down roots, and those who merely passed through.

In July of 1873, a telegram arrived in Tacoma: the small waterfront community had been selected as the terminus of the Northern Pacific Railroad (NPRR). Under a tight deadline to connect the railroad to saltwater, the railroad raced to connect Tacoma to existing rail lines along the Columbia River at Kalama, WA.

Built between the fall and winter of 1873 by a diverse group of laborers, including over 750 Chinese workers who had also worked on the Central Pacific Railroad, the Tacoma-Kalama line was finished with weeks to spare on December 16, 1873. Regular train service began in January of 1874. The Northern Pacific established their first passenger depot at 17th Street and present-day South Hood Street, close to the location of Terminus.

The final leg of this railroad ran from Tenino to Tacoma, passing through the “burnt prairie” near Olympia. Thus, it became known as the Prairie Line. For roughly a decade, the Prairie Line was the only “game” in town. Rows of brick warehouses lined its tracks. 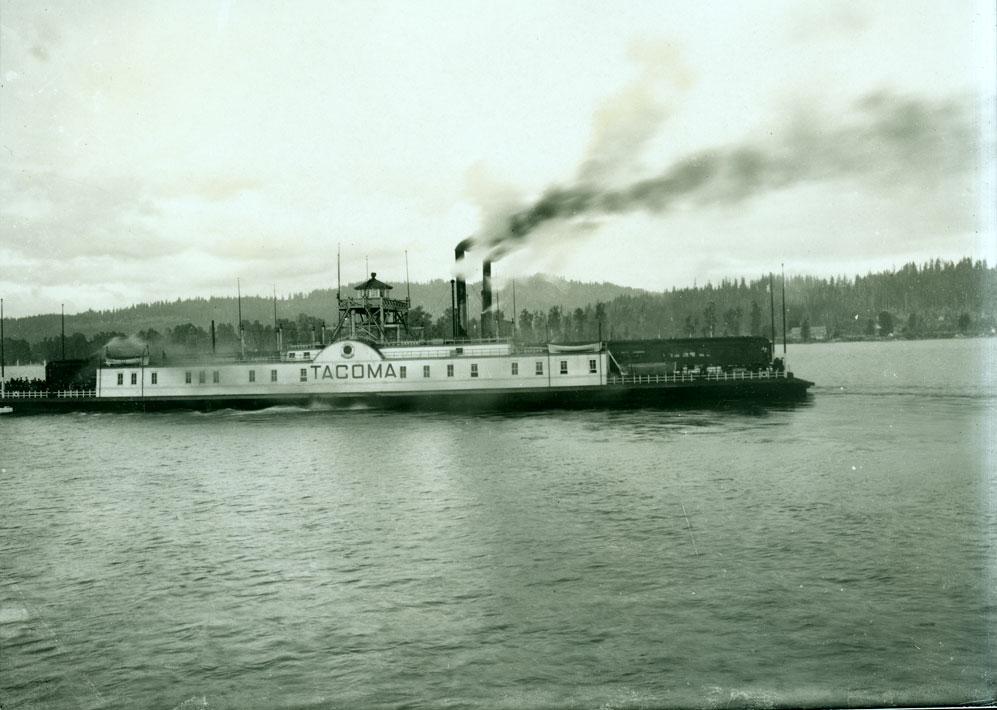 However, the completion of the rail line into Tacoma didn’t immediately bring the boost the city wanted. Tacoma only grew by 283 people between 1875 and 1880. The Tacoma - Kalama line wasn’t ideal. To reach the Northern Pacific main line, trains took a ferry — equipped with rails — across the Columbia River. Once in Oregon, the track finally shot eastward toward the plains.  But the line wasn't connected to the Midwest unitl 1883, holding Tacoma’s growth in check. Tacoma’s population began to climb in the mid-1880’s, reaching 7,000 people by 1885. 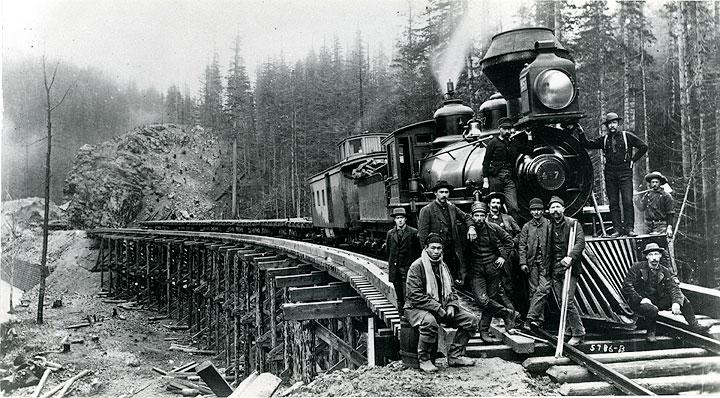 Railroad workers in front of a locomotive

The real boom came after the NPRR completed the Stampede Pass tunnel, a direct route that cut through the mountains of the Cascades to Eastern Washington. By 1890, Tacoma was 36,000 strong.

The Cascade Branch met the Prairie Line at South 15th Street, bringing with it Tacoma’s first major surge of passenger traffic. The next wave of newcomers, many of them immigrants, poured into Tacoma. Ethnic enclaves took root in Old Town and west of the Prairie Line on the hill overlooking Commencement Bay. Swedes, Germans, Danes, Italians, Norwegians, Greeks, and Croatians grouped together to ease their transition to America and preserve their culture. Japanese immigrants, arriving by ship, also settled near the rail line, opening hotels and other businesses and creating the Nihonmachi, or Japan Town neighborhood. Many African-Americans who arrived in Tacoma worked for the railroad, and some settled up the hill in a neighborhood that would become known as Hilltop.

Brian Goldbloom is a sculptor and public artist, well known for his site-specific stone constructions. Drawing inspiration from each site, his natural stone pieces provide contrast and interest to built environments.