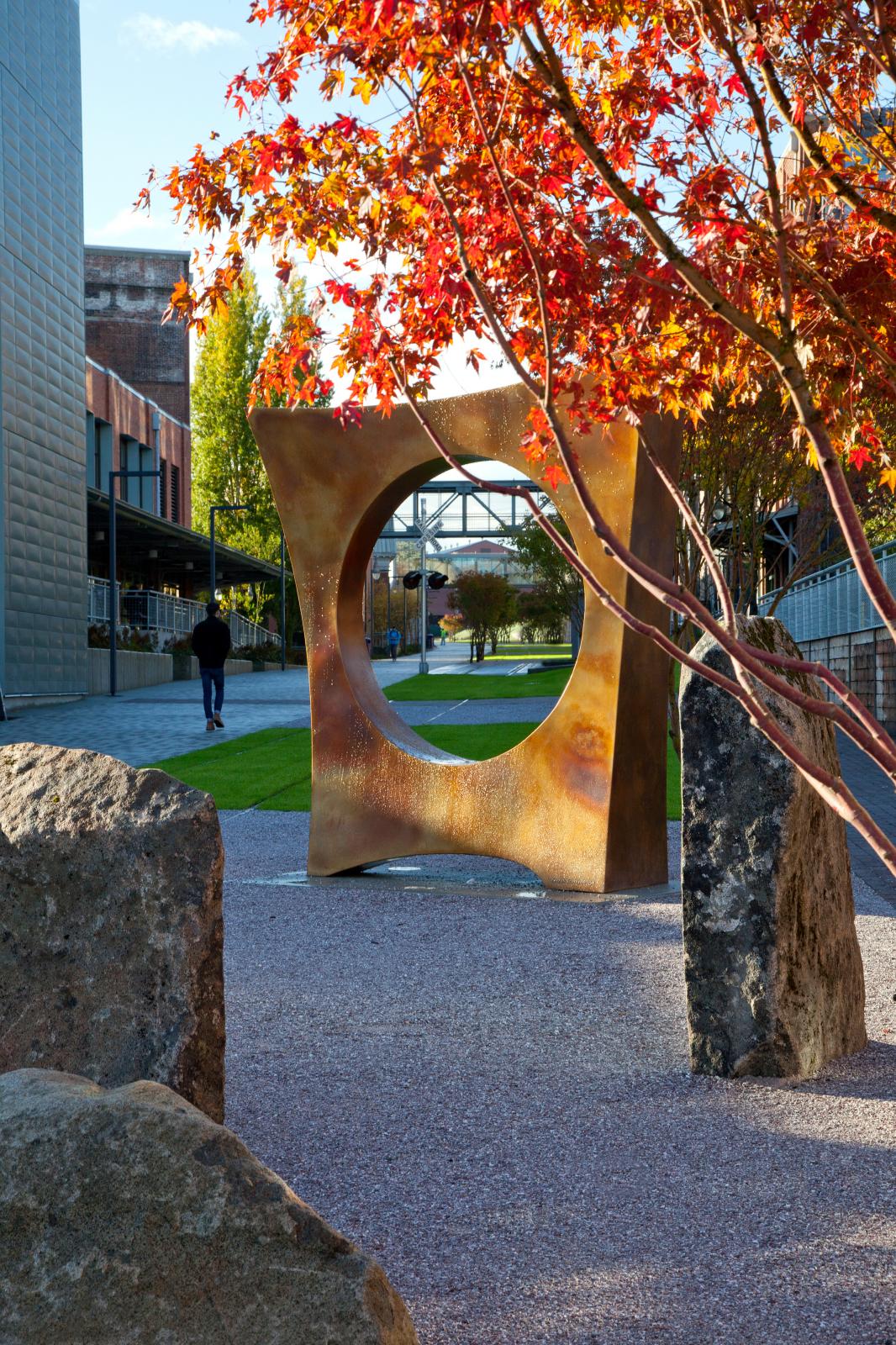 This nine-foot-tall sculpture honors the Japanese Language School that once stood at Tacoma Avenue and S 19th Street. It also celebrates the Japanese American community that thrived in this neighborhood until incarceration during World War II.

Maru stands among a landscape of boulders and Japanese maples. The bronze sculpture has a large cut-out circle, inviting visitors to sit, touch, and interact with the piece.  It also offers an opportunity for contemplation and learning about the history of the Japanese Language school, which was located a few blocks up the hill from the sculpture.

Maru, which means "circle," might alternatively evoke a sense of negative space, or the image of a closed, unending circle. Similarly, the piece suggests both the hollow space left in the community after wartime incarceration, as well as the continued presence of the Japanese American community in Tacoma. Japanese ship names often end in -maru, so the piece may also refer to the importance of Japanese ships in bringing people and goods to Tacoma.

As the point of arrival for the railroad, the hillside west of the Prairie Line corridor hosted many ethnic enclaves, including the Nihonmachi, or Japan Town. By 1890, approximately 500 Japanese-Americans lived in Tacoma. Arriving by ship, many Japanese first came to work in railroad construction. In the 1880s, the Northern Pacific enlisted Hifumi “Harry” Kumamoto to recruit 2,000 Japanese laborers to help build the Cascade Branch of the NPRR. Building this more direct route over the Cascades was what made Tacoma finally boom.

As the city grew up, so did the Nihonmachi. Japanese entrepreneurs like Fujimatsu and Sadako Moriguchi set up shop. Established in 1928, their store — Uwajima-ya — sold Japanese staples to countrymen craving a bit of home.

The Japanese Language School, Nihongo Gakko, served as the main hub of Japan Town. From 1911 through 1942, the school brought the families of a thriving urban neighborhood together to support the future of their community and their children. The school was located on the 1700 block of Tacoma Avenue in a bustling neighborhood of hotels, restaurants, laundries, banks, and houses. For three decades, the school instilled in its young students the moral and cultural values of their Japanese heritage, and also emphasized a strong commitment to American citizenship.

Japanese Americans boarding a train at Union Station to be sent to internment camps, May 1942

Two months after Japan's attack on Pearl Harbor, President Franklin D. Roosevelt signed Executive Order 9066. The order forced people of Japanese descent into internment at inland camps away from the Pacific military zone. The Japanese Language School was used by the U.S. to register members of Tacoma's Japanese community before sending them to internment camps. Most Japanese-Americans spent the duration of the war incarcerated in these camps — with the notable exception of those who served in the U.S. Army instead. In fact, several were recruited to military intelligence because of the language skills they had developed at Nihongo Gakko. Decades later, the Civil Liberties Act of 1988 acknowledged that the government's actions were based on "race prejudice, war hysteria, and a failure of political leadership" rather than any credible threat to national security — but this acknowledgement could not undo the discrimination, suffering, and dissolution of community for many Japanese Americans along the West Coast.

After the war, many in the Japanese community did not return to the Nihonmachi, finding other places around the West to settle. The language school stood as reminder of the scattered community, and the effects of wartime incarceration left a scar on Tacoma's cultural and urban landscape. In 1993, the building was purchased by the University of Washington Tacoma, but it was determined too hard to reconstruct, and the the dilapidated building was demolished in 2004.

The university has contributed to the preservation of the heritage of the Japanese Language School with this public art memorial.  In addition, professors Lisa Hoffman and Mary Hanneman recorded more than 40 oral histories of the former students of the school.

While designing Maru, sculptor Gerard Tsutakawa worked with an advisory board of former students. The late landscape designer Kenichi Nakano also collaborated on this sculpture.

Tsutakawa’s designs combine the cultures and traditions of the Pacific Rim, incorporating Japanese forms and sensibilities with his lifetime of experience living in the Pacific Northwest's unique natural environment. Well known for MITT, the sculpture that stands outside Safeco Field in Seattle, his sculptures are humanistic, accessible, and inviting.